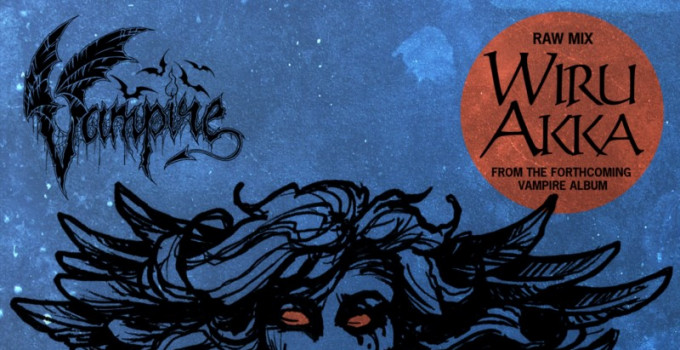 
“The main ideas for 'Wiru Akka' came up after a glorious trip to Bergen, Norway two years ago when Hand of Doom and I went to see Master's Hammer, Mayhem and a few other bands of historical importance. We decided to release 'Wiru Akka' as a preview from our upcoming third album as it carries the usual VAMPIRE trademarks: skull-crushing rhythm guitars and relentless drumming topped by sinister harmonies and vocals. We want to make clear that this is a quite hasty mix of the song. We intend to make the final mix of the album more majestic and underworldly - to be released next year.” - Black String -
“Again, the album was recorded at Nacksving Studios in central Gothenburg. And just like on 'With Primeval Force', the recording was split into two separate sessions with several months apart. We work like this in order to allow ourselves to see what direction the material is moving in, and to open up for a certain creative flexibility in the writing process.
The lyrics for 'Wiru Akka' take the listener on a journey way up north to pay visit to a certain heathen idol of the Sami culture. Experienced VAMPIRE listeners will perhaps recall the name being invoked in one of the songs on the first album.
All in all, there are lots of new and exciting things under the Baevi sun, but a substantial part of what we do seems to remain unchanged.” - Hand of Doom -